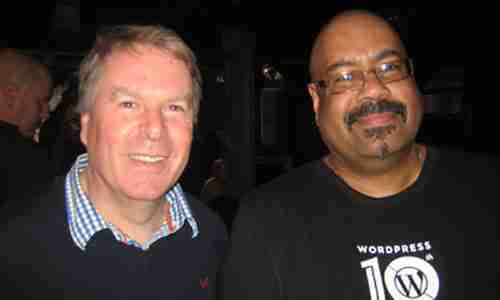 I was fortunate enough to be invited to the WordPress 10th Birthday party in Manchester where Mike Littler (WordPress co-founder) was giving a talk.

With around 61 million websites and 40 million new posts published on its platform each month, WordPress is one of the truly amazing stories of the internet age. With the constant upgrades and ever inreasing number of plugins, it is no surprise that The Web Hound has adopted WordPress as its chosen CMS.

We are fortunate enough to have one of the co-founders living in our midst in Stockport running his own small web development company. In fact, it always amazes me and the others that attended the 10th Birthday party and indeed the WordPress training courses that Mike runs that they we learning from one of the creators himself, the man who put down the first lines of code on a content management system that has gone on, virtually single-handedly, to change the face of online publishing.

Now millions of businesses from CNN and NBC to Telegraph Blogs and TechCrunch, right down to one-man blogs and indeed Prolific North itself, uses the WordPress platform.

The story began 10 years ago whilst Mike Little, now 50, was working as a technical architect at Manchester e-commerce specialist Zendor.com. Mullenweg, (Mikes co-founder) lived in Texas, had been contributing some minor code improvements to b2/cafelog, an early blogging platform that he used to host his photos.

To hear Mike tell the story in his own words please click here.